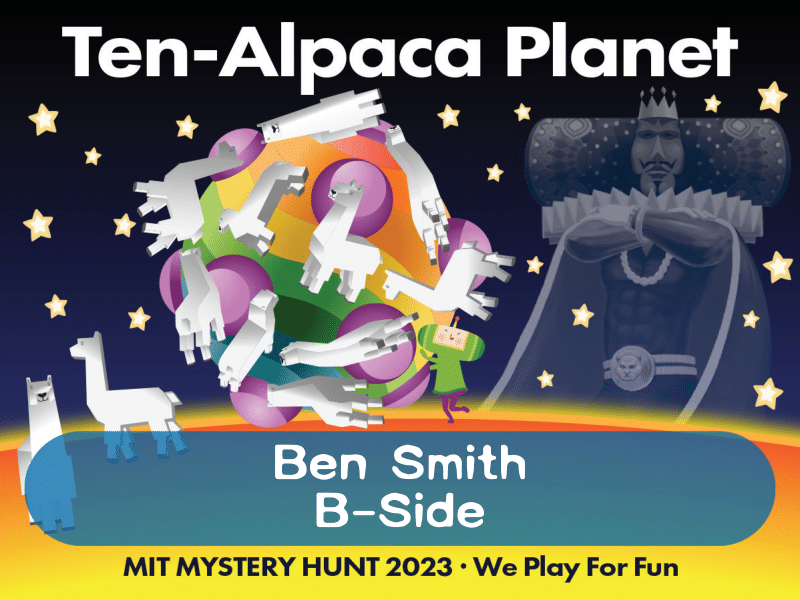 Howdy! This is a post about the 2023 MIT Mystery Hunt and may contain spoilers about the event and its puzzles, so proceed accordingly.

How to Write A How To Do Mystery Hunt Seminar

Step 1: ask your friend who thinks about Mystery Hunt stuff on a deeper level than you do if they want to collaborate on it

Step 2: get the heck out of their way

No, seriously, asking Jen McTeague if she wanted collaborate on what our How To Hunt Seminar would be was the. best. decision.

Jen made a ton of brilliant video breakdowns on Hunt structures for our team while we were writing our Hunt, and her deep love of what makes for a good Hunt felt perfect for the general goal of the How to Hunt seminar, Getting People Who Don’t Know What They Signed Up For Excited About This Crazy Puzzle Thing.

Jen and I were having some initial conversations on what content we wanted to cover when Teammate reached out to us asking how we were planning on running things. Not wanting to lose the ability to do this for everyone who’s hunting, not just the people that show up in person on Thursday night, we opted to do things in two parts: an online overview in the vein of what Left Out and [whoosh] Galactic Trendsetters [neeyow] had done the past few years, and something more interactive for the in-person part of things.

The online version of things is pretty straightforward and much more information-driven. Jen ran the puzzle and meta side of things, while I took the Who Are We, What Is The Mystery Hunt, and the Hunt Safely (AKA Have You Seen Wastewater Numbers Lately, Please Wear A Mask And Wash Your Hands On Campus) sections.

Jen fully took the reins on the interactive in-person side of things, writing a suite of puzzles about how to solve common Mystery Hunt puzzle types with contributions from Joon Pahk (a cryptic) and Shai Nir Hana (a really beautiful Japanese-style logic puzzle). I suggested the location puzzle should do something with the pi-ish nature of the room we were in (4-159, which was our HQ the year Palindrome was I Prefer Pi), but that’s literally all I can claim to have done with the set - it’s all Jen. 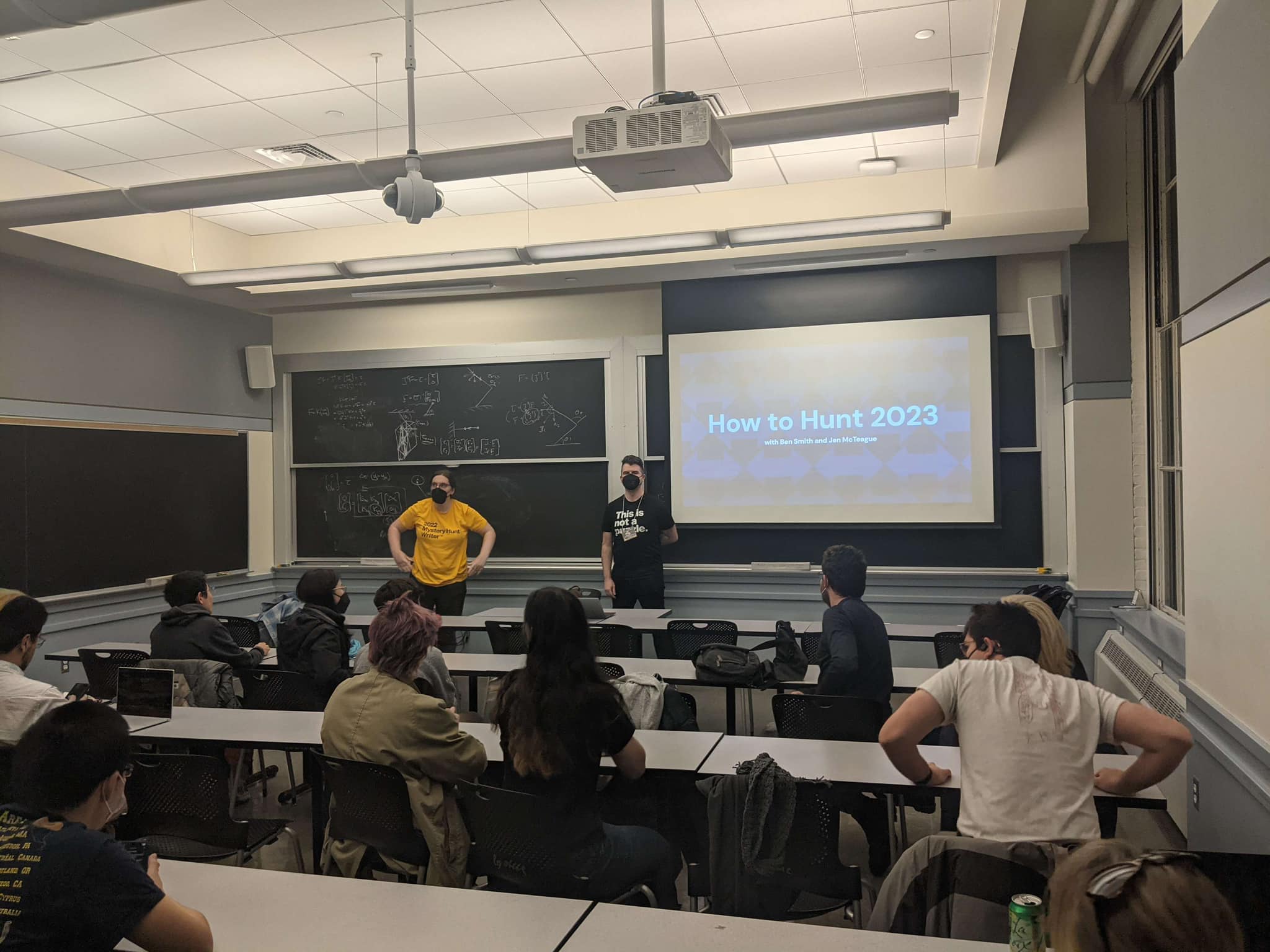 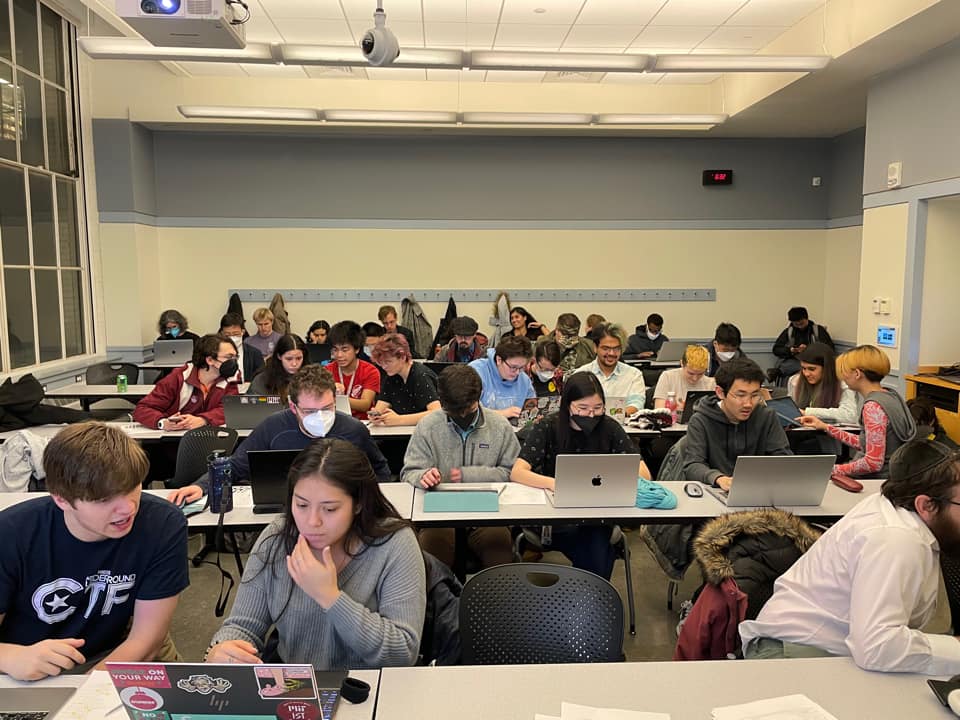 I would have been happy if we were presenting things to 5 curious solvers, so I was blown away that we had a full MIT classroom full of ~50 people excited about this, to the point that people were sitting on the floor (there were chairs available. I don’t get it, but I also have 34-year-old knees). We did an abbreviated version of What Is This and How Can You Do This Safely, then let people loose on the puzzles. Jen was fully in her element as math teacher, and I was glad to revel in watching people solve our stuff. Plus: now I get to say I was a Visiting Speaker at MIT.

As noted in my wrap-up of our hunt last year, I’m in charge of Palindrome now! It’s still wild to me, and it didn’t fully sink in just what that means until I met up with some of our team members after we got done running the seminar at a local brewery. 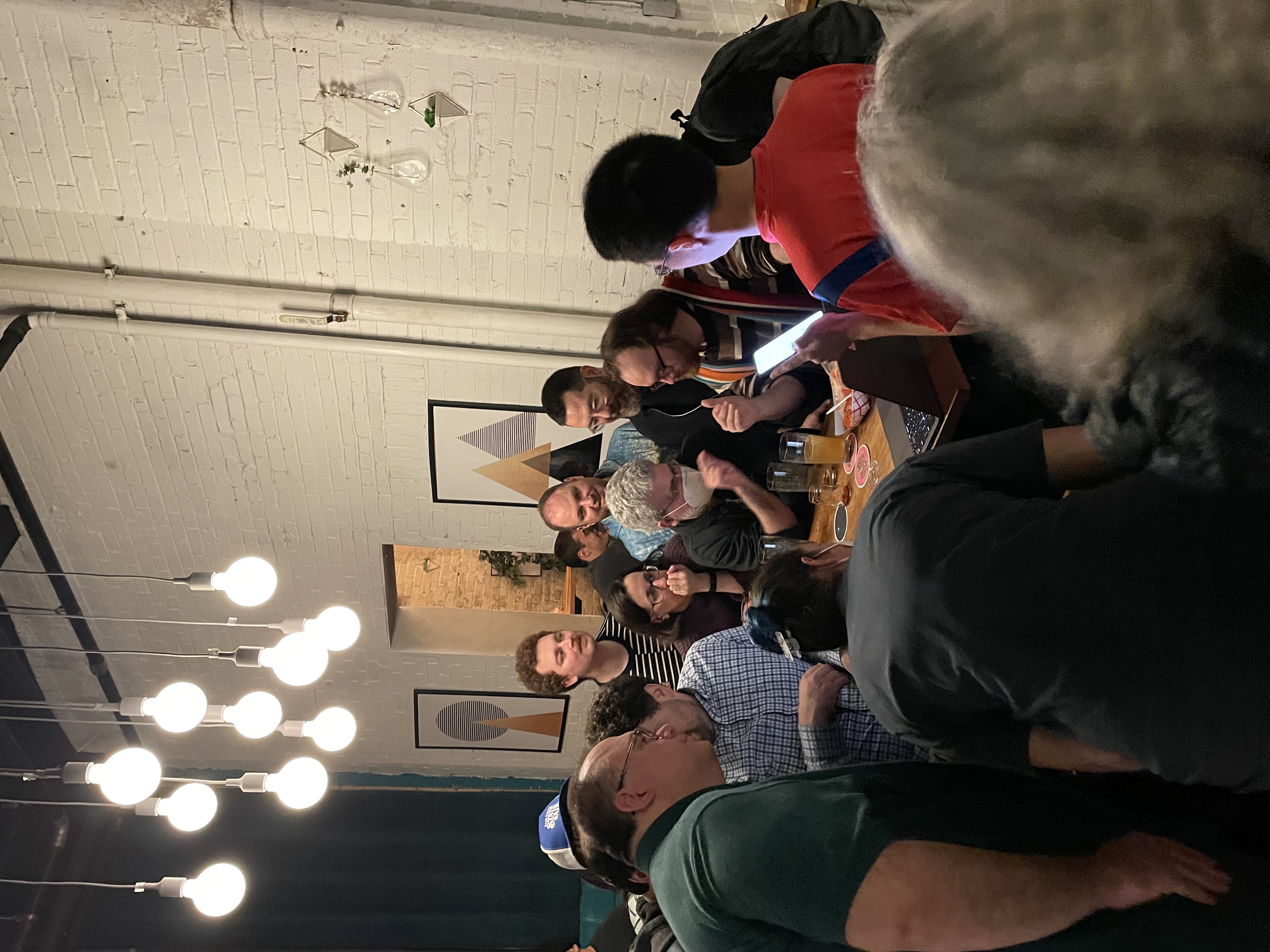 With COVID numbers where they were, my main choice as team captain this time around was to try and find a hybrid mode between our prior on-campus presence and the remote structure that had really worked for us when 2021 demanded it. We were able to fully support our remote-only solvers in a way we hadn’t done as well on up to that point, and I didn’t want them to drop that for our entirely-remote solvers just because we could be back on campus.

A lot of this worked, but as someone who solved from our on-campus HQ, there were a few things that still need ironing out for next time. An MIT IT change that happened at 10am the morning of Hunt definitely threw me for a loop, since our Discord infrastructure now no longer worked for our HQ, and there were a few other things I tried in setting up our team that were worthy experiments, but need some tweaking depending on how remote we are next year.

This got me off to an unsteady start as captain, but a few team meetings into this late on Friday I felt completely in my element. Having a team goal of “not winning Hunt” definitely helped me feel at ease (especially as the nature of this Hunt revealed itself).

The team running Hunt seemed to realize early in the process that we were heading into a potential 2013 scenario and quickly increased the amount of free answers we had a chance to earn in the Hunt. I tried to make sure we used these “nukes” judiciously - was someone working on a puzzle we were targeting and having a good time? Did we feel confident that this was something that would open up a new meta (which we uniformly liked)? How could we make sure we were maximizing everyone’s fun? I did my best to be gentle but decisive with this more strategic element of things, and it was great to have deputies in the room with me (whether that “room” was our classrooms or a virtual room on Discord) helping figure out what could help us the most.

We were a solid 6 hours out of contention, and our new solvers on the team seemed to be in high spirits, even with this year’s extended runtime, so goals accomplished all around.

3 Things I Liked About This Hunt

In thinking about this year’s Hunt, both during it and in the week after, I’ve realized that I’m still too close to the writing of our own Hunt mentally to keep from comparing the two. That’s not fair to teammate, so I’m going to do my best to keep my notes on the 2023 Hunt to the things I liked.

The scope of what Teammate wanted to do with the story of this Hunt is the sort of meta-narrative Hunt About Writing The Hunt bullshit that is absolutely my jam, and I absolutely have to put some plot points I’d want to stick into a Hunt theme aside because they were tackled here in such a delightful way.

Similarly, I love the ambition of the “weird” AI rounds

Add to all this the distinctive, increasingly beautiful design (the Ascent round as a whole was stunning visually and I’m sad that the main reason it unfurled for us was using answer nukes), and my only wish is that more teams were seeing these rounds as Hunt increasingly dragged on.

Maybe chalk it up to me seeing M3GAN the weekend before, but as soon as we discovered MATE, I totally expected a beat of the Hunt to be a HAL-esque unplugging of its drive to take over Mystery Hunt. I said something to the effect of “well, MATE is too cute to be evil” to the team intending it to be facetious, but that turned out to actually be the case!

Instead, Teammate wisely made themselves the villain of the storyline at every step where it could have gone the other way, and it made the story more emotionally fulfilling.

The AI interactions done in dating-simulator/live voting fashion was also brilliant - it got around the tricky logistics of live team interactions we didn’t have the tech team know-how for with the 2022 Hunt, and were just delightfully entertaining.

Attempting to Shrink The Hunt

Mystery Hunt is big. I’d even hear the argument that it’s gotten too big and needs to be shrunk down. The one year that Mystery Hunt got solved in 14 hours may have been a little too far in the other direction, but I’m not mad that Palindrome ended up finishing that one early Saturday morning - all of my friends were in town! We got ice cream, saw other teams, and played board games in our room, and it meant lots of other teams got to see more of the Hunt than they usually might.

I’d maybe like Hunt to last until late Saturday/early Sunday for most teams, but I don’t think that attempting to calibrate Hunt to have a shorter runtime for teams at the top is an overall bad goal for the next teams that write. Aim for the middle of the pack teams to see all of the wonderful, crazy things you come up with, and give small teams some sort of early-in-the-Hunt accomplishment to be proud of.

Teammate tried to reduce the puzzle count, but number of puzzles alone is not the only calibration as part of this equation. There was a lot of grinding in this Hunt on an individual puzzle level, and while that’s fine up to a certain point, if it’s happening for a lot of puzzles it can really wear you down. Sunday was frustrating for us - we had a handful of forward solves with a LOT of nukes being used since the puzzles that were opening up would continue to reveal themselves to have lots of onerous steps.

The editor in me saw lots of places where I’d want to tell writers to see if they could take the cool, magic part of a testsolve - a clever aha, a story twist teams weren’t expecting, some sort of jaw-droppingly elegant construction - and get solvers there faster than you think you need to. 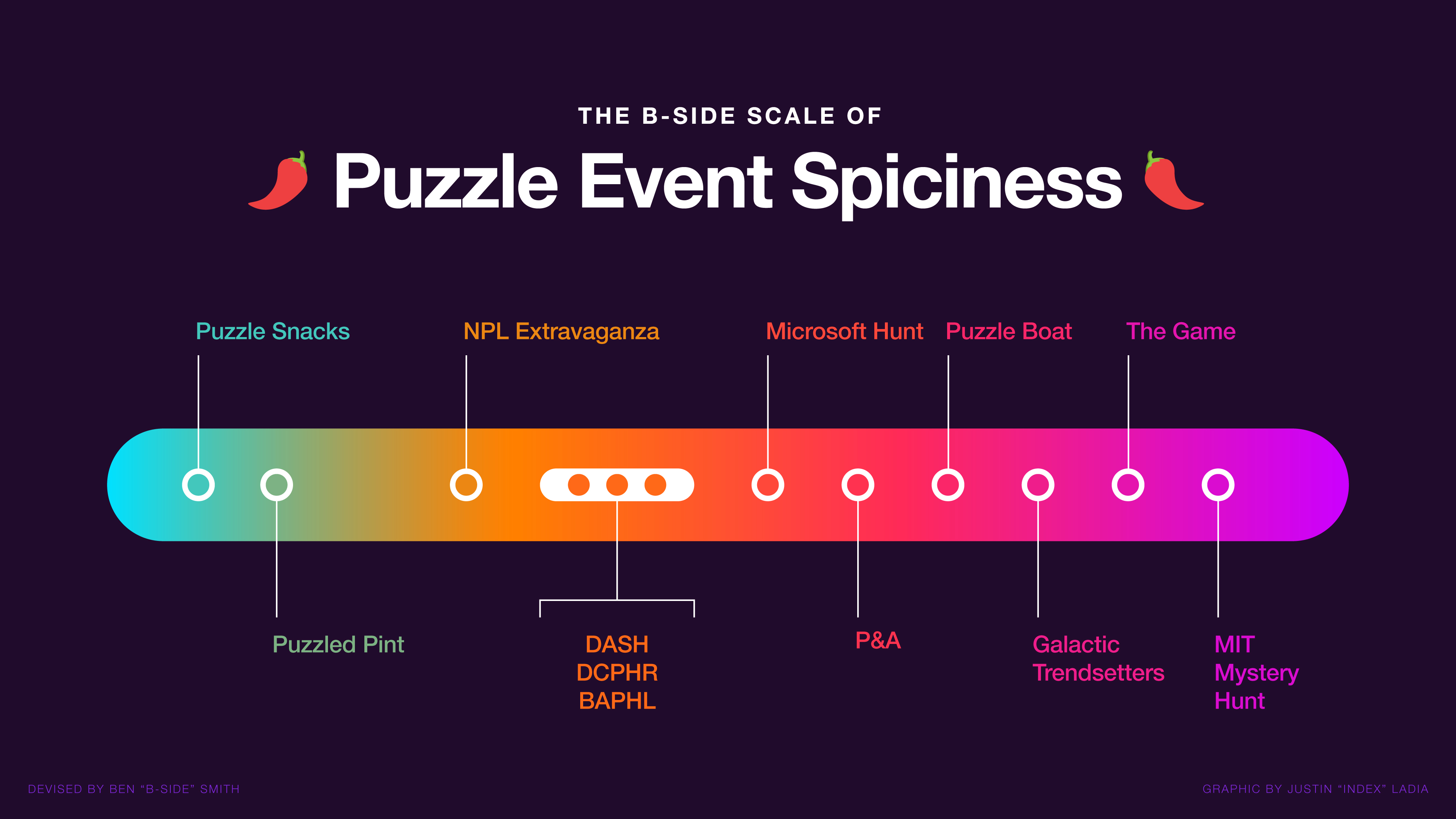 I made an informal puzzle Scoville scale for Hunt Spiciness after doing the Miskatonic Game a few years ago. Should it probably be a two-axis matrix? Yes, but it’s a pretty good explainer on how hard your event as a whole can be. There’s now a need for a puzzle Mohs scale to go along with it - how can you best measure how the individual puzzles within an event make for a varied, appropriately sized event? 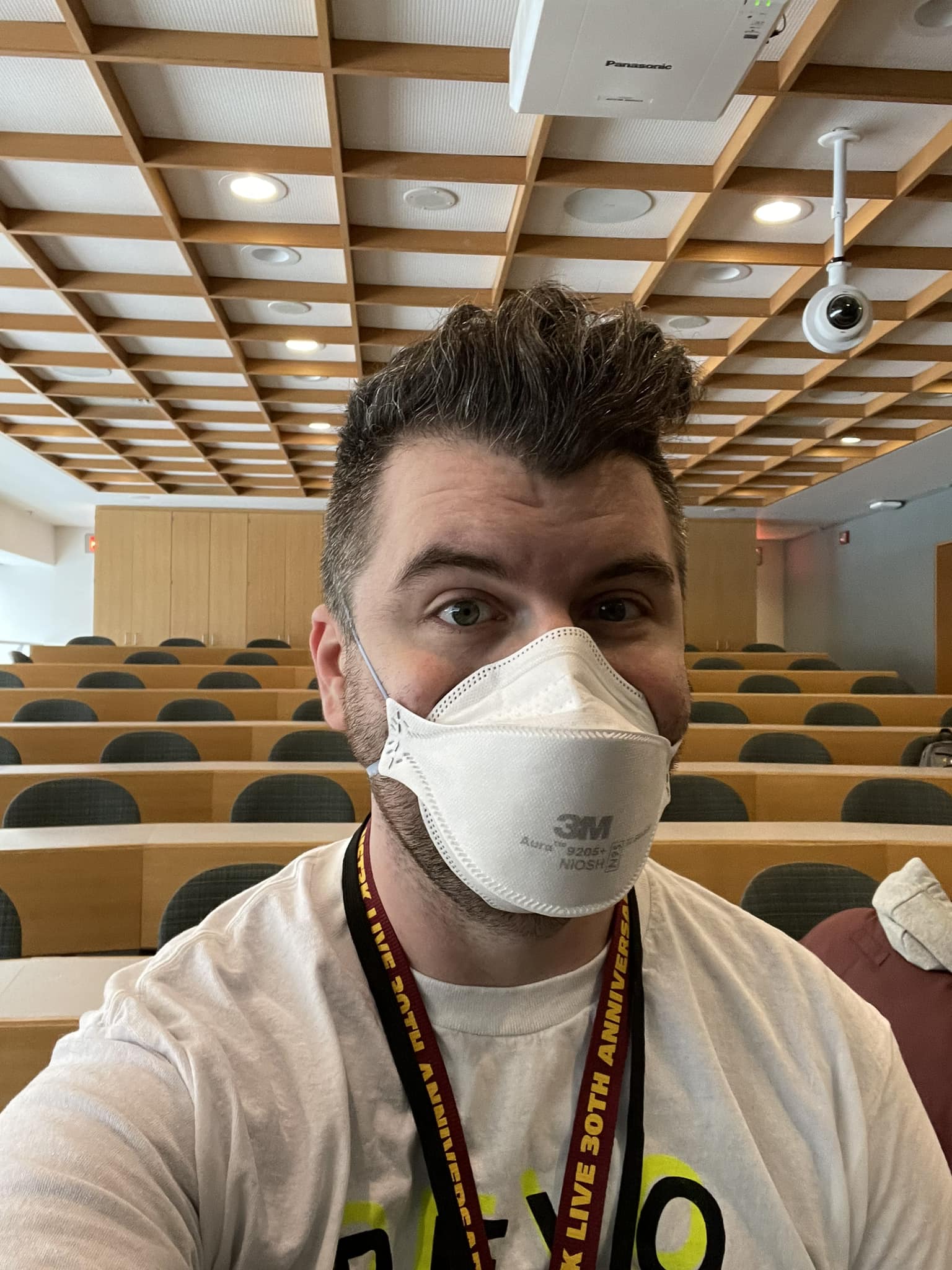 This is already longer than I planned, so let’s wrap this up.

This was a lovely Hunt with some really admirable big swings, and I liked it a LOT, even for all the moments in the heat of things where I was slightly frustrated.

I’m looking forward to doing this again next year, when Palindrome Will Not Be Winning Hunt again.

You heard it here first.